In 2021 and 2022, 1st and 3rd person games (such as Last Island of Survival and LOST in BLUE) are performing great. More “standard” games in the craft survival subgenre, like Westland Survival, have also performed well.

There have also been attempts to expand this narrow niche with a major genre shift — the release of Frostborn: Action RPG.

Looking at the genre and the niche itself, not much has changed since its explosive emergence. This is clearly reflected in the results of the biggest publisher in this category — Kefir!

The main problem for such games is the price of user acquisition. Since the genre itself is very hardcore, buying users is an impossible task. Within the games, you would encounter a large divide between low-paying and high-paying players.
The problem of client retention also adds up to it. In such games, players either become the main audience and fall in love with it for its complexity or leave it at the first difficulty. This genre differs from others precisely because of how it works with emotions.

To address these problems, developers created a large number of “simplified” survival games. And then there is the unsuccessful example of “Mutiny”, which initially showed good prospects but quickly declined.

Let us analyze all of this in detail!

How does the monetization of “classic” survival games work? The answer:

Sale of bags and inventory slots

When a new player starts a game of this genre, they get an offer to participate in a special event on the map. The player visits this place on the recommendation of an advisor or as part of training. There are no enemies; instead, they will find many valuable rewards the player would not be able to take all at once. At the same time, the event is temporary, and the player feels the possible loss of winnings. At this point, they are offered a bundle with an expanded bag.

The bundle offers the possibility of buying boosters along with the bag. Usually, it’s the best bag in the game, but not always. 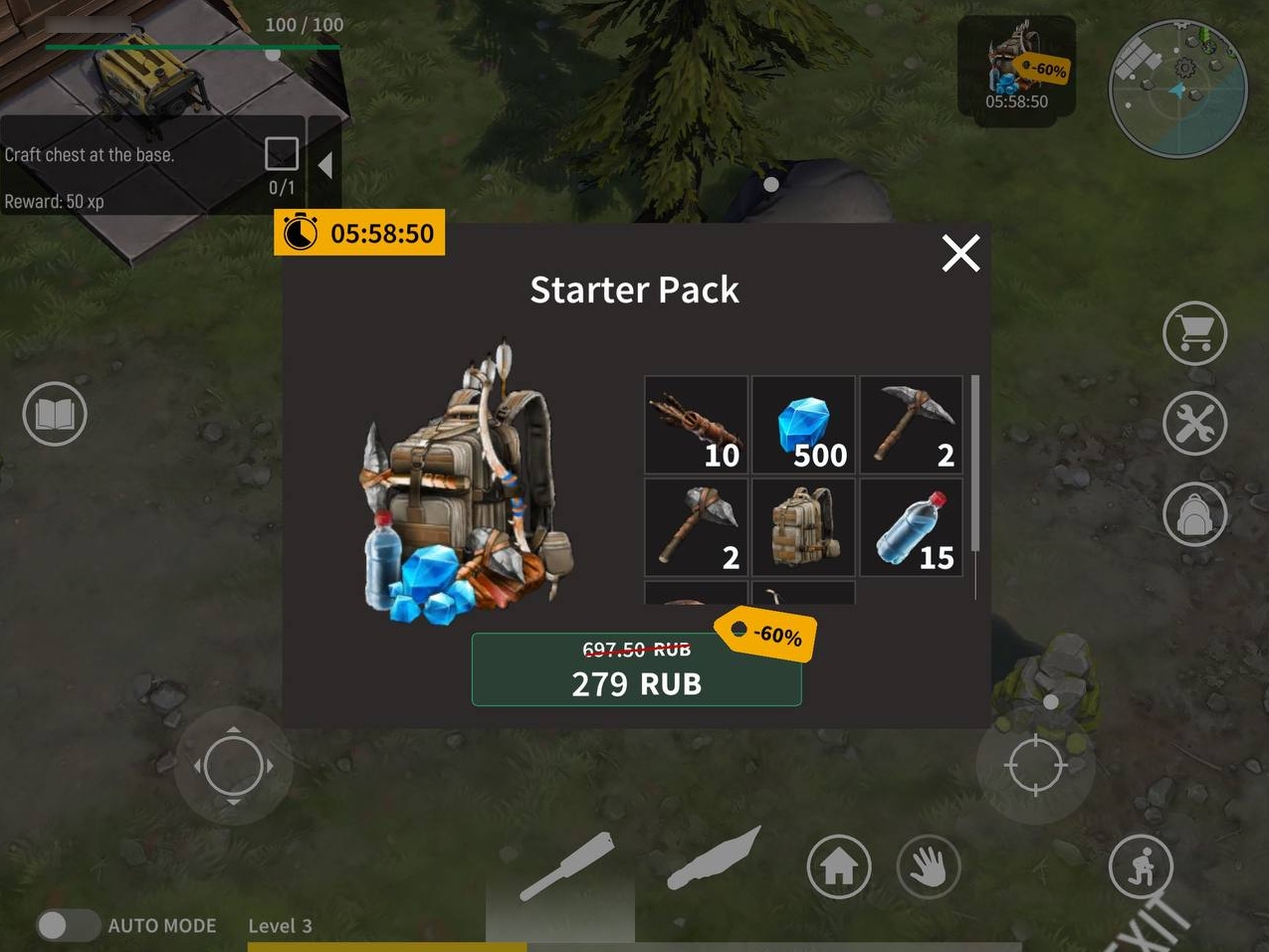 Here is the moment when you enter the map from such an event. In the screenshot you can see the most valuable bag.

And this is a set from the store: this bag is average but better than the basic one.

The first front runners of the genre (such as Grim Soul) designed the game so that the bag could be lost whenever the character dies. Later, Mutiny made it so the bag does not disappear and is also very cheap. Or such was the case before the latest updates.

This is an important change in gameplay and monetization because the loss of a purchased bag has a strong impact on the payer. Either they buy it again, or the loss turns out to be so severe that they eventually leave the game.

Perhaps this decision did not have a positive effect, which is why the developers changed the mechanic.

Now, the bag in the game gradually breaks down as the player begins to lose. It’s not as hardcore a loss as in other games, but after a few deaths, any bag eventually breaks. But even then, the developers allow the players to repair their bags using special resources. It is an intermediate version of the mechanic and a serious departure from other games of the genre.

Sale of parts for transport construction

“Standard” mining games employ the mechanic of energy consumption. The player needs it to move quickly from their base to the resource mining locations. They have a choice: either spend energy or wait. To spend less energy or to get to special areas on the map, the player will need transportation.

Doesn’t matter whether it’s a horse or a car; the important thing is that the player can collect almost all resources for free. Except that something important specifically for that particular building will still be missing. Said something is either not available for free at all, or requires a player to spend a lot of time to get it themself, through their efforts or by watching advertisements.

You can see on the screenshot that the player lacks one item necessary to build the stable: a bridle.

The basic principle of selling things in this genre is to sell them in sets. Items are never or almost never sold individually. It is important to pay attention to when exactly the purchase is offered. The difference from other genres is that items here have a certain durability and thus can break.

The harder the game, the faster the items break. In softer games of this genre, items break slower or can be repaired, like in Mutiny.

An example of an entire set sales window.

What’s important here, is that the player comes to this window to get their free reward for watching a video. And on the left, they see the most profitable bundle on offer.

Join the community & receive monthly summaries of our materials
Login
Category
How-2-IncYMo
Related articles
iINCYMO
Cooking Fever
iINCYMO
Monetization trends in 2022
We use cookies on our website to create the most effective website possible for our users. Read more here.
Approve
Sign up